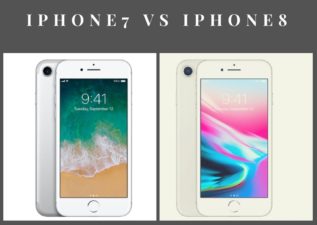 Apple comes back and launched its new iPhone 8 series. Should you upgrade to new series. Let’s take look and compare the iPhone 7 with iPhone 8 and see what’s new apple has added this year.

In view of design and display, iPhone 8 gives us same look as iphone7.This is because both are existing with the same design and available with 4.7-inch and a 5.5-inch display panel, the same bulbous cameras, the same strip. However, apple this time bringing back with the glass sandwich design which we all last seen on the iPhone 4S.

Processor, Storage, and IOS – Faster and smarter with high storage:

Performance wise apple claims that the iPhone 8 faster than Iphone7.  It’s come with the A11 chipset (Hexacore unit) which is 30% faster, multitasking and even more power efficient compared to A10 chip inside the iPhone 7. Phone Storage is also the key point for Apple phones as later no expandable option available with iPhones. By observing people high storage requirements, iPhone 8 has been launched with two storage model 64GB and 256GB. Which higher compared to iPhone 7 32GB and 128GB. If we talk about operating systems iPhone 8 has been launched with newest ISO 11. However, people who are running with iPhone 7 also start receiving the update for iOS 11.

Battery life and Charging – Not increase, but wireless and faster:

There are no major changes in battery capacity as iPhone 8 will give you same backup like iPhone 7. It supports 1822mAh battery compared to 1960mAh in the iphone7. However, there is a notable advancement in iPhone 8 as it supports fast-charging, means you can charge your 50% phone within 30 minutes. The new iPhone 8 has an option of wireless charging, which is major changes compared to iPhone 7.

Cameras – Not increase, but camera sensor is more advanced:

camera megapixels would be the same as 12 but camera sensor bit advanced with the better pixel, faster autofocus, more natural looking and magnificent images. Now camera can record videos at 60fbs which is a reform from 30fps. Front camera no changes, Apple has continued the same 7-megapixel sensor in iPhone 8 as well

7 Helpful SEO Tips That Will Optimize Your Keyword List. The Cheapest SEO Strategies to Implement: For Startups or an Individual Blogger